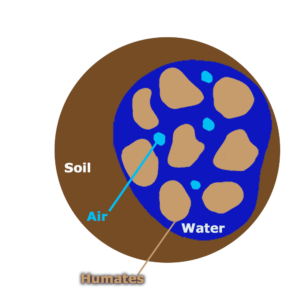 In today’s world water retention is a cost-cutting benefit. It also benefits your community in a time when only one percent (1%) of the land’s water is safe to drink. Do you live in an area where your underground water is being siphoned, extracted, bottled and sold off to far-away places?

Organic mycorrhizae-containing products, such as Natural Biota products , help build a spongy soil with the mycorrhizal hyphae – not only reducing nutrient run-off but also reducing flood pools to accumulate on your cropland, groves and orchards. As the blue blob representing a water droplet in your soil (see diagram above) shows, retaining water means that your micronutrients and minerals dissolve into solution. Not only that, the water matrix is a natural biota, a micro-ecosystem, where positively charged minerals meet countless carbon-based molecules, such as fulvates and humates. The minerals piggy back on the carbon molecules in order to enter the plant root system. This is a process known as chelation and is a vital component of plant security. This gatekeeping allowing desirable elements such as iron to enter a plant, and disallowing toxic fluorides or heavy metals (cadmium, lead, mercury) from being absorbed.

All this leads to some confusion among farmers who have not witnessed the old ways of farming that existed prior to the green revolution that took many countries away from the threat of starvation, but also discontinued some beneficial aspects of traditional farming. For example, it seems counterintuitive that a healthy and well-balanced ecosystem and soil biota on a farm can perform better than a conventional farm even though the conventional farm commits to much higher NPK values.