Beside protecting your plant above-ground with a foliar program that incorporates Natural Biota’s PREVENTYS, you will also protect your crop below the soil surface. For example, as the mycorrhizal matrix takes hold, making a sort of underground sponge-like carpet, you will reduce pest populations, such as root knot nematodes. The power that is contained in Natural Biota, and hopefully, in many more companies that approach agriculture with a similar perspective, is to create a living interdependent matrix that intertransports nutrients so that each species can survive, while also maintain a balance that breeds defenses for the crop, which is essentially an integral part of the survival of all the other species. 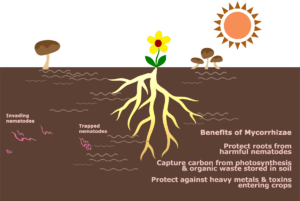 In turn, this will reduce overhead costs dedicated to controlling pathogens, such as powdery mildew, root rot and grey mold.

What is the science that drives our company? There are many. One that is particularly interesting also answers another question: How do the benefits of eating yogurt at my breakfast table connect to Natural Biota products?

Recent crop-science studies have shed light on why wild varieties of plants seem to have better defenses than their relatives that are used as cash crops in agriculture.

Studies examining the tobacco plant have identified that conventional farming (with normal use of pesticides, herbicides and fungicides) creates a biocide environment. What this means in terms of the tobacco plant is that when taken out of its natural environment – a tobacco plant immune to certain problems that its hybrid relative is facing on a field – will encounter the same infection and problems after the seed is transmitted seven generations under conventional farming. In other words, within a span of seven generations, the tobacco seeds no longer carry with them natural protective bacteria that not only co-exist on the plant in the natural environment, but the plant manages to stow away the beneficial bacteria and protect them so that its progeny can make use of the microbes that have been optimized around itself. Basically, there is a symbiotic multigenerational interdependent relationship between bacteria and cash crop. This is the singular most evolutionary concept that can change agriculture because it provides empirical evidence that explains some of the mysteries of why traditional farming was able to exist for thousands of years without an associated chemical industry.

Now, with these microbial species, more than 99% of which do not harm a plant, available and propagated, the microbes not only are able to provide certain necessary elements out of thin air (like carbon, oxygen, nitrogen, hydrogen and sulfur), or manufacture scents that attract beneficial insects, or produce enzymes or vitamins, but they can also compete against pathogens. Competitive exclusion means that when they are wanted, the plant supports their growth. With mutualistic support, they create a defensive wall or defensive shield, greatly reducing the possibility of a pathogenic invasive substance to take hold. This is the most important beneficial microbe that we apply for foliar application.

The greatest difference between market-driven fertilizer manufacturers and home-made compost tea production is that when a farmer uses various tricks to quickly bloom a microbial population, they do not know what they are propagating. There is a slight risk of propagating Enterobacter or breeding microbes that will consume carbon as a food source. Propagating bacteria for fertilizer can create some negative impacts to soil health, including the possibilities of:

This is not to discourage experimentation, quite the contrary. There should be more sharing of knowledge with regards to organic fertilization development and management practices, because we have not even begun to scratch the surface of utilizing living species to help harness their power for the benefit of farming and food security.